You are here: Home / Event

NENU2PHAR project is a 5 years project financed by the H2020 European programme that is aimed to develop a viable alternative to existing petrochemical-based plastics that is sustainable and biodegradable.
The project brings together 17 partners (5 large industrials, 6 SMEs, 5 RTOs and 1 cluster) leaders in the different fields of research, from biomass development to formulation of biopolymer up to plastic processes. One of the resources highlighted in the project is to use micro-algae to creates bridgeable plastics.

Registration for the event, “Éire go hIbéire,” is now open!

You are invited to a Zoom webinar.
When: Mar 24, 2021 10:30 AM Dublin
Topic: Marine Spatial Planning in the Atlantic Area

Register in advance for this webinar:
https://zoom.us/webinar/register/WN_8ym70hpFS6q6UresBby-Ug

After registering, you will receive a confirmation email containing information about joining the webinar.

“Nanoparticles in aquaculture: should we be concerned?” webinars will take place on the 16th and 18th of February as part of NANOCULTURE project. We emphasize that the session on February 18th will be presented in Portuguese, with the contribution of Dr. Begoña Espiña, Leader of the Water Quality Research Group at the Iberian International Nanotechnology Laboratory (INL, Braga) and general coordinator of the NANOCULTURE project, and Dr. Alexandre Campos, Researcher at the Blue Biotechnology and Ecotoxicology Group at the Interdisciplinary Center for Marine and Environmental Research at the University of Porto (CIIMAR / UP). On that day we will also count with the participation of Dr. Narcisa Bandarra, from the Aquaculture, Valorization and Bioprospecting Division from Instituto Português do Mar e da Atmosfera, IPMA (guest speaker). Below are the details of the events and the links for registration:

More information about the webinars through the link.

The study now published in Aquaculture , shows that despite increasing feed intake, dietary glycerol inclusion levels have negative effects on growth performance, rising the nitrogen excretion. In addition, dietary refined glycerol does not spare the use of proteins as a metabolic fuel, suggesting that this compound is not effectively used as an energy source.

To find out more about this study, please follow the link.

As part of the Access2Sea project, local expert networks have been gathering to share their ideas on the European aquaculture industry. This is taking place along the Atlantic Area on a local level, with expert network meetings already underway in Ireland, France, Portugal, the UK and Spain. 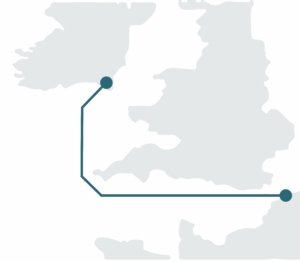 The direct seabridge between Ireland and mainland Europe has already proved to be a key element in security of supply for trade with the core European market.

Not surprisingly at our last webinar in Ireland, see Mayo Ideas Week Speakers and Schedule and Aquculture Producers’ Webinar, the current economic collapse of seafood prices was at the fore. This collapse is squarely attributed to the health crisis of 2020 but of course another impending crisis was also discussed. Britain’s exit from the common market and customs union at the end of 2020 has presented a massive threat to the seafood, especially shellfish, industry here.

Access2Sea then, hosted guest speakers from the aquaculture sector in Ireland as well as project partners from Brittany for the event, “New Opportunities for Shellfish Producers” as part of Mayo Ideas Week in September. Also previously reported here, http://access2sea.eu/trade-winds-irelands-blue-economy, the pandemic alone was responsible for a drop in turnover of 40-60%.

A market collapse with further trouble ahead…

The UK landbridge describes the logistic reality of Ireland’s trade with its continental European partners from the 19th until now: for historical and other reasons, Ireland’s trade has tended to be shipped to a high degree over the UK. This involves two ferries bridged by hours of driving which still takes only 20 hours to reach the continental motorway network from Dublin and thereby the mainland European market—its almost exclusive destination—on time and fresh. Now that the UK left the EU, with Britain exiting the single market and customs union, this is a problem that had threatened to hold up travelling transit traffic. No alternative had been offered to do the same job at our Mayo meeting.

Our next meeting was on the 15th of December and the urgency associated with the landbridge expressed at the last meeting was already out of date. Not only had sailings from Ireland to Roscoff and Cherbourg been consolidated in the meantime—there is a daily sailing now from Ireland (Brittany Ferries and Irish Ferries). In addition to this, Dublin—Dunkerque is now a daily reality thanks to a new DFDS route.  And not to forget recent direct Ireland routes to Rotterdam (CLdN) and Santander/Bilbao (Brittany Ferries). From a hauliers’ point of view, a realignment in how goods are accompanied—a mixture of driverless, drive and fly and accompanied options have made the direct seabridge increasingly competitive and most importantly for shellfish producers, reliable.

Problem solved? Time will tell, but it certainly ushers in a very welcome degree of certainty for just-on-time trading of fresh produce between Ireland and the core European market. The first few days post-end-of-transition-period Brexit have shown that Irish industry has saved itself a lot of trouble in implementing a reliable alternative. Europe’s reopening may take longer than expected but it is of course the second key element to restoring the shellfish–along with many other–industry.

The final conference of the H2020 project Genialg will be held online on the 30th of november!
The Horizon 2020 Blue Growth project GENIALG is the first industry-driven project bringing together pioneering companies in large-scale integrated European biorefineries and experts in seaweed cultivation, genetics and metabolomics to boost the seaweed industry. GENIALG is aimed at boosting the Blue Biotechnology Economy in Europe by designing high yielding seaweed cultivation systems!

To register to the event: http://genialgproject.eu/genialg-final-conference/